Black-box learning involves trying to learn as much as you can about how a system functions based solely on observations of the inputs to the system and the resulting outputs. This problem is unsolvable in the general sense, but
remains relevant and interesting to a wide variety of problem spaces. 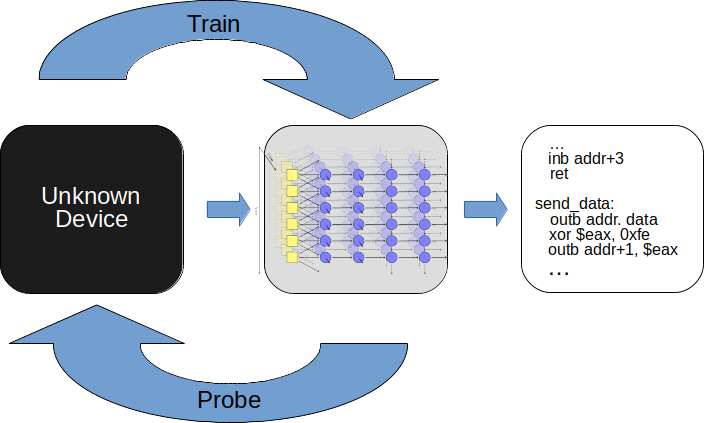 Our key observation in this research is that input/output observation pairs look a lot like training set data for machine learning. Instead of trying to learn an exact model of the system under test, can we instead train a recurrent neural network using the observations to develop a functionally equivalent model to the real system. In essence, we replace the “black box” with a functionally equivalent “opaque box” of a trained neural network. The observed internal state machine of the black box, which can not be observed directly, is then encoded in the structure and weights of the trained recurrent network model, which are observable and provide valuable insight into how the original device works.

Since we’re only learning a fuzzy approximation of the original model, we side-step the computational complexity issues with traditional grammatical inference methods, while maintaining enough fidelity for a wide range of tasks.

Official source code for dataset generation and examples of network creation is available on GitLab:

I'm a busy man. I'm a father, a husband, a graduate student, a software developer with many, many years of professional experience, an open source advocate, a Linux kernel hacker, an avid baseball fan, a tinkerer, a builder, a reader, a thinker, and a hat wearer.